The discussion about smart cities is mostly about ‘smart’ and far less about ‘city’. If we really want the city to become smart, we must look beyond smart technologic solutions and we must see how and why the city is currently changing. Cities, city-creators and technicians should develop one vision together, which will function as the foundation for the future city and the current city.

We are living in an extraordinary era. The rise of all sorts of different devices and mostly the constant connection between everything and everyone, gave a new meaning to the word ‘place’. Namely, a place used to be very exclusive. Less than one age ago, you could only experience something, by attending the occasion. It was not possible to be at two occasions simultaneously or to know what was currently happening at another place.

For instance, the review on 125 years of football in a Dutch football related magazine (VI) really showed that things have changed. One century ago supporters used pigeons, who were trained to send messages, to the games when the team has to play out of town, to inform them about the score. Telephony and telegraphy did already exist, but radio and television did not. What happened in the arena could only be experienced by the people who actually were there. The place had possession of exclusivity. Everything can everywhere
During the previous century the local exclusivity has disappeared. More and more people are able to work, shop, attend lectures and watch football everywhere. Also, we are able to do it all in real time. We are everywhere and always connected with everything and everyone. Smart City is therefore about communication. About communication between people, between devices and between people and devices. Examples: smartphones, smart thermostats, self-regulating devices, VR-glasses, communicating garbage bins, cars which can contact the garage and buttons on the washing machine which can automatically order new laundry detergents. The list of examples becomes daily more extended.

City builders and other city creators should ask themselves what those changes will mean for their city and should take that as the principle of developing the future vision of their city. They need to describe the ‘why’ and the ‘how’ behind the ‘what’ where the discussion about smart cities is currently about. Because only if we know the ‘why’, we will know which processes and products are needed to build this vision. In other words: what do we want with our city and how can that be built in current circumstances. Kevin Lynch’s book ‘Good city form’ offers a good starting point to answer this question. Lynch elaborates a normative theory to measure the urban quality, based on fundamental human values. He examines how these values can be able to create a better understanding of the development of the city. He talks about seven indicators (vitality, fit, sense, control, access, efficiency and justice) which are broad and general enough to be used in specific circumstances and places. These dimensions are interesting, because they help you to fit the ‘why’ of smart city-initiatives in a bigger context. Who has influence on what (control)? Does everyone have similar access to information, locations and utilities (access)? And what efficient for who and at what price (efficiency)? The seven dimensions assist to connect the new technologic developments with the essential vision on the quality of the city and her inhabitants. Every smart city initiative states to be willing to make the city better, cleaner of more lively. We need to ask ourselves who will benefit to current solutions, to what extent and with which management. City is about quality of life
To begin at the ‘why’: it is not different than a hundred or even a thousand years ago. Just like in the ancient Rome or in the Hanseatic Cities we strive to build a quality of life, which enables economic, social and personal development.

The rise of the internet(technology) changes the possibilities and differs from city to city. There is one common denominator and it is named flexibility [1]. The rise of the internet makes us flexible in many areas, the internet of things demands a flexible city. The question is what the urban consequences will be. What does it mean for a city when you can do everything everywhere? When you are able to work at a pub? When you are able to watch a NBA-basketball game live (via virtual reality) just in your living room? When you are able to skype your kids when you are in the stadium, watching a football game? What does it mean for a city when devices can communicate with each other? When the street-lighting turns on when people walk by? When in fact everything has become data?

There is a new urban layer upon the city, which consists of data. What are the consequences for town-planning if that layer starts to communicate with her users? If a public square can become a parking-lot, reacting on traffic? If the street-lighting leads the emergency service in a disaster (like the emergency lighting in an airplane)? What does it mean for a city if the creators of Pokémon Go define meeting places on the basis of algorithms (in this case location information and the way users move in the city)? In short, what does flexibility of the city mean for the city and what are the consequences for those, who cannot or do not want to develop. What are the social consequences of the growth of flexibility? Learning from electricity
Of course, a lot is still unclear, the future is not here yet. But fortunately we know an inspiring example and that is the rising of electricity, approximately one and a half century ago. The result of this was that the city could develop itself enormously. Trams, subways, but elevators too, made it possible to transport people and wares far further, so civilians could live further away from places where fresh food was produced. The urban answers came from enlightened spirits as Le Corbusier. The currently well-known concept ‘megacity’ was someday invented and was a direct result of a technologic revolution. It is not about a judgement on these plans, whether they are good or bad. They show that the development of a cities was being reflected, that a vision was being developed because of new technological possibilities. Just like with the rise of electricity, the internet creates a new phase in the development of cities. And that should be planned too. That will often go well, but sometimes it will not. Both good plans and bad plans will be created. A common context to describe the ‘why’ and ‘how’ of the smart city, for instance based on an overarching, normative theory, could help us with it.

But everything is better than the current situation, in which we pretend that the smart city is about tools, gadgets and applications. We really need to take change seriously. While planning a city, the changes of the city should really be taken in account.

Publiced before (in Dutch) at Platformoverheid.nl

Note
[1] This is covered by the dimension Fit in Lynch’s theory. One of the aspects which he names is ‘adaptability’: to what extent a city can adjust itself to changing circumstances. 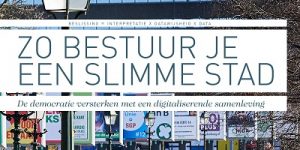 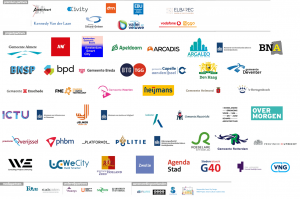